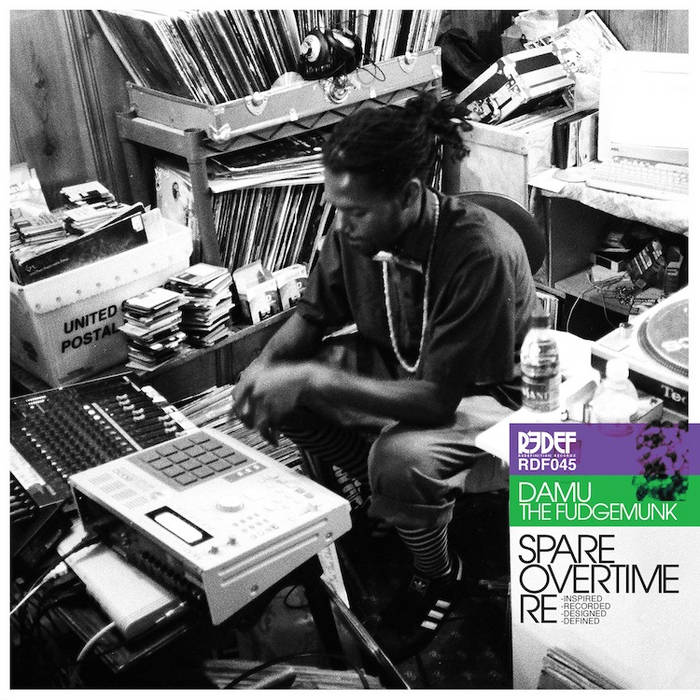 It was 5 years ago. If you’re familiar with “How it Should Sound” (RDF007), this is how it all started. Back in winter of 2008, Damu the Fudgemunk released a collection of instrumentals entitled, “Spare Time” (RDF002) as a free digital download to the masses. It was this album that introduced Damu as a solo artist and Redefinition Records to thousands, taking blogs and file sharing sites by storm. “Spare Time” was such a success, that a sequel “Overtime” (RDF003) was released in the summer of 2008. Collectively, both “Spare Time” and “Overtime” have exceeded over 200,000 downloads to date. With the rapid growth of Redef and the expansion of Damu the Fudgemunk, several titles have been released since in various formats making both the brand and artist, one of the most respected and relevant in independent hip hop. Ironically, “Spare Time” and “Overtime” never saw a proper release on vinyl or cd until now. The fans have spoken over the years requesting this material in physical form and to popular demand, “Spare Overtime RE-Inspired...” is the answer.

REDEFINITION RECORDS (aka Redef) is a hip-hop record label with roots in New Jersey & Washington DC (Co-Owned by Damu himself). Redef releases music on all formats including vinyl, CD & tapes. Previous & current projects include collaborations with some of the most respected artists in hip-hop including Damu The Fudgemunk (co-owner of Redef), MF Doom, Pete Rock, Blu, Talib Kweli, Ski Beatz, Roc Marciano, Kev Brown, The Artifacts, K-Def, Grap Luva, Klaus Layer and even Kanye West.

All songs Produced by Damu The Fudgemunk for Redefinition Records

About Spare OverTime...
Newly recorded, re-sequenced and retitled versions of the beloved instrumentals were prepared for this album. Both “Spare Time” and “Overtime” have been consolidated into one and in the vein of “How it Should Sound”, Damu revisited all the old floppy disks to create the best listening experience. Constructed on his MPC 2000, the album is intact with The Fudgemunk’s signature production style and interludes. Two freshly composed unreleased tracks were conceived exclusively for the deluxe version which includes a 45. This is quite a bonus for fans who want more new music from Damu the Fudgemunk. Damu’s previous release, the “Spur Momento Trailer EP (RDF-C001)” was a step in a new sonic direction. His latest, “Spare Overtime Re-Inspired...” is reassuring that he hasn’t completely abandoned the sound he is known for, unlike some other artists who progress.

Get more info at www.redefinitionrecords.com