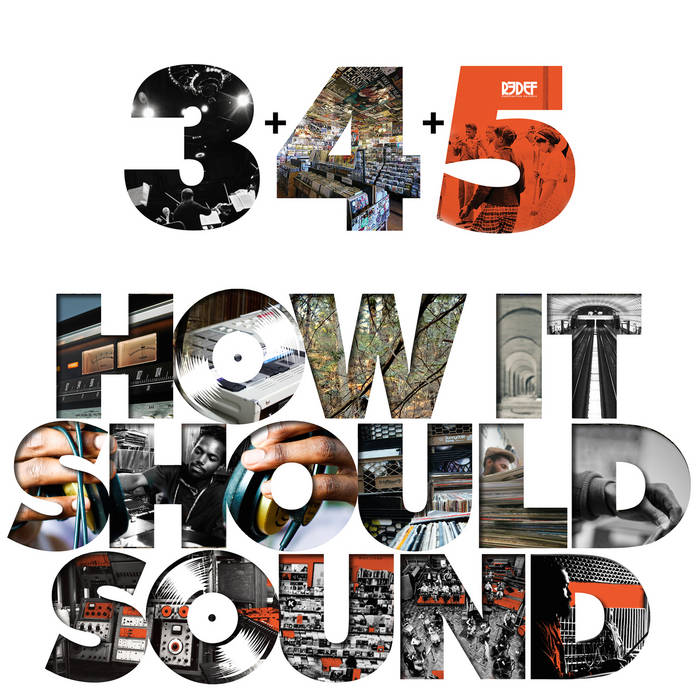 Sumo La’ulu This comp has been on heavy rotation lately. Very impressed with it. Just wish I could have heard these years ago when he made them. Favorite track: Diamond Digging (2004).

walterwarm "How come that's your favorite sound?" "Because, that's the sound at the beginning of my..." Favorite track: Pursuit (2008).

Ghost In The Sky

The positive response to HISS 1&2 (2010) was unexpected for Redef as a label and for Damu The Fudgemunk as an artist. Not long after it’s release, the project took on a life of it’s own and has continued to grow and evolve over the years. In 2014, just 1 year prior to it’s 5th anniversary, I started to think about how I wanted to do something special to acknowledge what is arguably my most popular record thus far. Aside from giving Volume 1 & 2 deluxe anniversary packaging treatment, I figured that more music in the form of a sequel would be dope way to celebrate. In early 2014 I went through boxes of floppies and started to compile what would go on to form HISS Volumes 3-5. The most important thing for me during the selection process was finding beats that were made during the same time period as the bulk of HISS Volumes 1& 2 (Depsite being released in 2010, much of the music was composed and stashed away, many years prior to the official release). In fact, many of the tracks heard on 3, 4 & 5 were candidates for 1&2 during the original 2010 recording sessions. Considering the reputation of the first 2 volumes and my artistic growth since, I found it very important to continue volume 3 where 2 left off, and to preserve the listening experience that many hold dear (ie The music of HISS sounds nothing Like Spur Momento). Those that know me are aware of my sentimental connection to my music before it leaves the studio and the level of comfort I reach with each piece before it gets released. The music of HISS were songs that I composed mainly for my own leisure, years prior to becoming a professional artist. Now in the year 2015, I have a 10 plus year relationship with many of these productions. When I listen to the music on projects like HISS and even Spare/Overtime, they serve as a great reminder of where I started and the excitement of learning, and then perfecting my craft as an amateur beat maker. The tracks are a combination of my many obvious influences, my personal passion to contribute to the genre, and to challenge the craft and the record collection I was building. Some of the techniques and styles associated with my production were in the discovery phase. I was developing my sound and also discovering new artists and records along the way, with each new element giving me additional inspiration, layer by layer. Back then, I would come home from a 9-5 office job, listen to records and make beats on evenings and weekends. Another thing worth noting with most of the stuff on 3-5 is that I consider those tracks my first wave of MPC beats. I bought the MPC in the summer of 2003, so there is a learning curve and honeymoon phase embedded within, which to me is very sentimental element with regards to my personal recollection of the music of HISS. There were several record stores in DC back then and most are now closed (they started to drop like flies after the arrival of Serato and with the rise of mp3s and filesharing). Digital crates did not exist, social media was in it’s primitive stages and the internet was just becoming accessible to most consumers in a way that was quickly impacting the music industry. Apple wasn't even a threat to Microsoft back then, if I recall. I was between the ages of 19-21 and my main motivation for producing music was ‘having fun’. The competitor in me (at that time) set out to be equal or better than any of the established producers I looked up to respectively. I used to make beat CD's and most of these tracks at some point were solicited to friends and artists during my early self promotion days (rest assured some of your favorites / legendary MCs, DJ’s and producers had these tracks on beat tapes that I personally handed out at countless events and chance encounters, as I circulated the east coast). I played these beats live on the streets of DC and some of them even had used been used for songs by MC's I knew. Side note: I was living in a different basement than the one people are familiar with during most of this time (different from the basement seen in the now infamous MPC POV vids).

So while you listen, keep all of that in mind.

The original plan was to create 2 new volumes… I set out to create HISS Volumes 3 & 4. Volume 5 exists now, but only out of necessity. In the middle of January 2015, a week before embarking on my first ever European tour, I recorded all of what you can hear on Volumes 3, 4 & 5. When we started the album editing and sequencing process, there was so much to choose from, the decision to select favorites and leave some songs behind was proving to be a major challenge. The first edit was way over the time constraints of both 2 LP and CD formats. After about 2 days of troubleshooting, the execs at Redef (ha!) decided to turn the extra time into what is now known Volume 5 instead of limiting ourselves. That was the only satisfying solution to create the best listening experience. Cutting down or removing tracks altogether would've have altered the album's feel drastically. Ironically, there was still over 20 minutes of material that we left off (hint?). Speaking of the complete listening experience, the LP’s introduction wasn't always a part of the plan. Originally I wasn't into the idea of introducing volumes 3-5 with a big introduction. I wanted a much less detailed opening or even no introduction at all. I planned to skip the intro and get right into the music. At the very last minute, my excitement in the project grew, and me being my toughest critic, my “slack meter” wouldn't allow me not set up the LP properly without a real intro. In the end, I decided to assemble the pieces used to launch all 3 volumes. In our opinion the project is much stronger as a result. Try listening without the intro and see for yourself. Considering the fans who get excited about my works, I didn't want to rob them of a full production. What is a performance without an opening? What would your favorite play or movie be without it's opening scene? With all the personalities sprinkled throughout and a running time of approximately 1 hour and 40 minutes, I can't imagine HISS 3-5 without it. A very important thing I didn't mention about this release is this; the more I worked on it, assembling, compiling and arranging it’s components; the more fun I had. I hope the audience is ready for more HISS. I had them in mind first while assembling the album. Redef is very excited to present this and we know you’re gonna enjoy what we do over the next couple years. I've already started thinking about a way to celebrate the 10th anniversary of HISS in year 2020!

Note: Purchase of this album does not come with reproduction / licensing rights (MCs: Do not use songs from this album as instrumentals for your own uploads without explicit written permission from the artist / label)